Although we may be highly influenced by the music that came along before the digital age, the beauty of technology is how it has opened doors for Indie artists to record, produce and distribute their music without the 100s of thousands usually put up by a record company and promoters.

William Steffey is one of those musicians so dedicated to his art that the creating and sharing is more important than the time and energy needed to deal with a producer and record company. He’s all those guys wrapped in to one and has been recording his own music for 25 years.

I recently had a chance to talk to him about his music and what makes him tic, to take a look inside.

JK: I’m really interested to know what created your passion for music?

WS: I had a rather stormy childhood, but was always able to find refuge from the elements in the grooves of vinyl 45’s in my parents’ basement. Paperback Writer, Day Tripper, Paint it Black, I Get Around, Kodachrome. Music was a magical world where I could escape and reflect. In my early teens I remember visiting Lake Geneva regularly with my mom and her boyfriend where I was introduced to the great songwriting of Chapin, Croce, and Lightfoot.

JK: How did that translate into you playing and recording your own music?

WS: I [began playing] all the ‘rock instruments’, which basically translates to guitar, bass, keyboards, drums, and vocals. I also have been producing since my father gave me a 4-track recorder when I was 12.

JK: Wow, that’s a lot of instruments! Do you have a favorite?

WS: My primary and favorite instrument is “the song”. All the instruments I play are just the tools used to compose and realize a solid track.

JK: It sounds like you had a really solid foundation in Rock and Folk Music.  Is there a musician or songwriter that influenced your sound more than any other?

WS: From a production standpoint, Thomas Dolby has probably influenced my sound more than anybody else. He’s known by his 80’s hit “She Blinded Me With Science”, which was somewhat of an anomaly in his catalog. The lion’s share of his other songs feature Introspective lyrics, interesting chord changes, and lush production. Guitar-wise I’m largely influenced by Johnny Marr who began his career with The Smiths.

JK: So now, with your varied musical influences, what is the genre with which you most identify?

WS: My songs fall somewhere in between new-wave, rock, and electronic with a tiny hint of jazz. I sometimes use the phrase “post-modern rock” to describe the pastiche of styles. Some of the groups that I find influential (e.g. Prefab Sprout, Roxy Music, The Smiths) have been labeled “sophisti-pop” and I think that works for me, too. The genres tend to move around a lot on my albums, and it’s only just in the past year that I’ve consciously been honing in on a more solidified sound. I recorded a song called “Scattering Platinum” and I liked the feel of it so much that I decided to make more songs using the same sound palette. I’ve been writing a few more tracks sticking to the exact same drum kit, effects, guitar tone, and keyboard patches. It makes for a kind of cohesion that comes naturally for bands that go in and record in a more traditional studio.

JK: Clearly your music is constantly evolving, where do you see it going next?

WS: I think my lyrics have always been honest, but they’ve also been incredibly cryptic. While I still have been writing with a decent amount of word play and metaphor, I am becoming more direct. I’m almost getting to a point where two listeners might come up with the same interpretation for the same song!

JK: (chuckle) That being said, who is your primary audience?

WS: Many of my songs are played online several hundred times a month… the song “Molly Molly” is consistently the most popular, but I have no way of telling who the audience is. I’m guessing much of my audience is comprised of people named Molly?

JK: Do you have a lot of interactions with  your listeners?

WS: Just enough to keep me going, and not enough to disrupt my routine at all. I occasionally get email from listeners, and just recently was recognized by a fan while I was out having coffee. He took a picture with me, and had me autograph one of my cds which he happened to have on his person. It is entirely possible that I was more excited than he was.

JK: How has the readily available digital download effected you?

WS: I like that my music is available online all over the world. It has allowed me to connect with people I never would have otherwise. Also, it costs me practically nothing to release an album, whereas manufacturing cds on a regular basis was getting pretty expensive. Also, I don’t have to worry about my catalog of songs getting lost.

JK: Is it possible for you to be a full-time musician?

WS: The fact that I don’t regularly play out makes full-time musicianship impossible. When I was younger I thought that fame was the end-all-be-all, but now I think I would just find it incredibly invasive. I don’t like being the center of attention, and I don’t enjoy the idea of being on the road constantly, either. I’m perfectly content with the amount of attention my music gets. I do freelance web design to make my way, and I enjoy it very much.

As much as we love our well-known artists here at Raised on the Radio, we recognize the amazing music that is being made by Indie artists who are playing for the love of music.

Please take the time to check out William Steffey’s music: 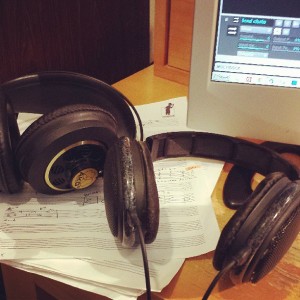