How On Demand Is Cheating Our Kids

In an age when it’s too easy to become a Ninja Netflix addict, stealthily clicking “next episode” on the iPad at 2am, knowing that you’ll regret it, and not being able to resist doing so, because it’s RIGHT THERE, right NOW, on demand, it’s hard to imagine that there was a time when life was so completely not on demand.

There was a time when television and radio controlled what and when you watched, and listened to.

When On Demand didn’t exist.

In 1979, music had become an important part of my life. Big important. I’d hear a song on the radio, love it, and then have to wait for the next time they’d play it to find out the name of the band, if they didn’t announce it afterwards.

And, they usually didn’t announce it afterwards, as the practice was to introduce it beforehand, play it, and then fade out the music while the DJ said what he thought about it while immediately going into the next introduction. The next new song.

Back then, the radio made or broke bands. Enough airtime meant that we – the public – would have a shot at hearing it, before, or after, school hours.

Enough airtime meant that we’d have a shot at knowing what the band’s name was. It meant bicycling to the local Walgreens after babysitting for 8 hours to afford a purchase of the next coveted LP. It meant bicycling home, LP mostly-safely tucked into a backpack, finally gotten home, and then, it meant a dedication to listening to the entire record. Back, and front. Over and over again.

Ah. Can you even remember listening to the entire record? Front and back? I think we’re missing out, a bit, now….

We put up holiday lights, on our ceilings, because we didn’t have You Tube, or anything else, and our holiday lights were beyond festive. We made magic. Before You Tube and MTV magic existed, even. We saved up to see bands, live. To buy their records. 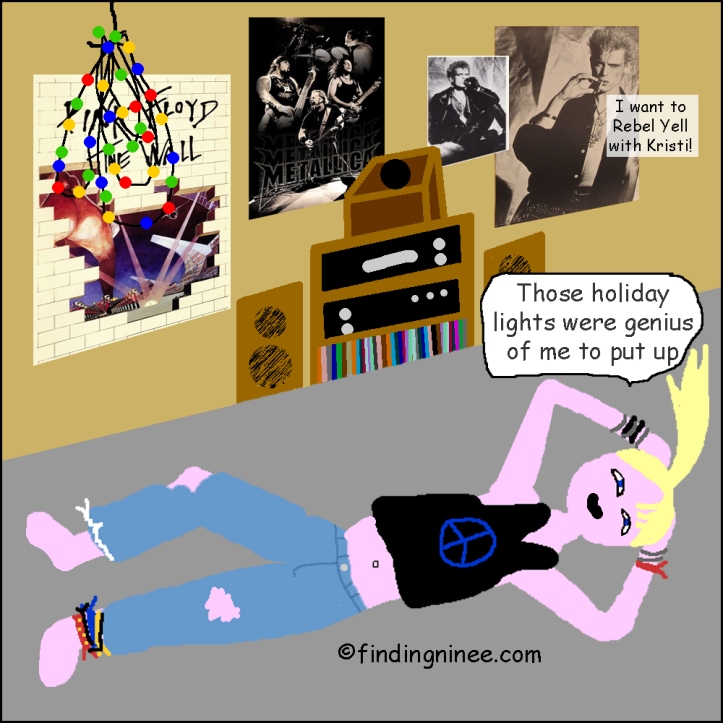 I miss those days.

Back then, it meant that liking a record was an investment. That when you “LOVED” a band, that it mattered.

Years later, when tapes came out, and you could drive, it meant that liking a song meant rewinding that tape in the car, to the song that you needed to hear again. And again, and again.

It meant that when your parents told you that your stereo – that took up half of the wall because you had speakers and an amp and a tape thing and a record player on top – was too loud, that you could put on hubcap-sized earphones. Shut them out.

It meant that when you found out how much you loved U2 and Billy Idol, that you’d spend hours in front of the radio, waiting to record your new favorite song, and that, often times, the DJ spoke over the beginning and the ending of it.

Which meant that your favorite songs, before you could bicycle to Walgreens and purchase the record, were listened to with a DJ’s voice wrecking the beginning and end. It meant HOURS, sitting in front of your too-large stereo, waiting to tape your favorite song.

It meant laser light shows. If you’ve never seen one, I highly recommend it.

It means that I will never let go of how it felt, waiting with anticipation for a station to play A Song. It means that although we live in a life of On Demand, that I’ll do my very best to teach my son that the best things in life are not clicked with a button.

That they’re worth waiting for.

That they’re not on demand. 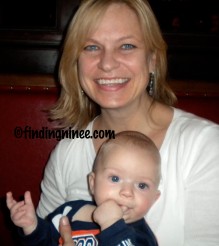 Kristi Campbell is a semi-lapsed career woman with about 18 years of marketing experience in a variety of national and global technology companies.  More recently, she was a co-host on a hilarious (and under funded) weekly radio show.  Once her son was born, she became the mom who almost always leaves the house in either flip-flops or Uggs, depending on the weather.

While she does work part-time, her passion is writing and drawing really stupid-looking pictures for her blog http://www.findingninee.com.  Finding Ninee (pron. nine-ee for her son’s pronunciation of the word airplane) started due to a memoir, abandoned when Kristi read that a publisher would rather shave a cat than read another memoir.  Its primary focus is humor and support in a “Middle World,” one where the autism spectrum exists but a diagnosis does not.