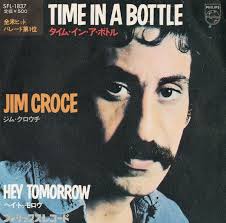 I think most of us experienced in our youth what I think of as a “Day the Music Died” moment.  We learned about the unexpected death of a performer we admired, and not only did we feel what was for many the first twinges of mortality, but we grasped the bitter truth that even our heroes are not with us forever.
For me that moment was September 1973, 40 years ago this month. I was sitting on a school bus riding to school when I heard a radio announcement that Jim Croce had been killed in a plane crash.
Back in 1973 I was a moody 8th grader just really becoming aware of pop music, but lucky to be witnessing what was probably the greatest era of singer songwriters ever. The first to really catch my ear was Jim Croce.  The first song by him that I like was “Bad, Bad, Leroy Brown.” I remember how cool and edgy we all thought we were singing a song with “damn” in it.  But I also soon discovered his heartbreaking love songs starting with “Time in a Bottle”.  This is music I have never outgrown my affection for.
Croce’s songs kind of divide themselves into 2 types. There are character studies, usually humorous; “Leroy” of course is the best known, but also Big Jim Walker of “You Don’t Mess Around With Jim” and “Rapid Roy the Stock Car Boy”. There are also the working class job songs, like “Working at the Car Wash Blues” and “Top Hat Bar and Grill.” Many of the songs involve someone getting their comeuppance like Jim Walker who learns “its not hustling people strange to you, even if you do have a 2 piece custom-made pool cue,” and Leroy who “Learned a lesson ‘bout messing’ with the wife of a jealous man.”
Then there are the love songs, among the most melancholy ever written, as one can see by the titles alone: “Photographs and Memories”, “One Less Set of Footsteps,” “It Doesn’t Have to Be That Way,” “New York’s Not My Home,” and of course “Time In a Bottle.” Certain themes occur again and again. Either the singer has lost his love, or he feels he will soon.  He feels the passage of time is coming between them. “There never seems to be enough time to do the things you want to do once you find them” (“Time in a Bottle”)
The very best in my opinion, is “Operator (That’s Not the Way it Feels)”.  The story of a broken romance is told through a man’s conversation with the telephone operator. The song is notable for how it tells the story:
“She’s living in LA
With my best old ex friend Ray
A Guy she said she knew well and sometimes hated.”
(So much better than “My woman left me for my best friend”)
He wants the phone number so he can tell the girl that he’s over her, and moving on, but can’t even convince himself, let alone anyone else. Finally in the end he gives up the effort. To me, the last lines of Operator are some of the best ever written:
“Thank you for your time
You’ve been so much more than kind
And you can keep the dime.”
The shortness of his life simply adds another layer of melancholy to what is already there. He was only 30 when he died, with a wife and 2-year-old son. When you listen to the few recordings we were lucky enough to get, one can’t help but think, here is a songwriter who was nowhere near his peak. When I listen to his music I always find myself grieving all the untold tales.
Meg Hammil is the mom of two Freshmen (high school and college)  and a book addict who gets all the double Jeopardy questions right. In her spare time she is a 911 operator, where she collects stories she can blog in retirement. Meg posts at  Meg on the Go and can be followed on Facebook  and on Twitter  @TheHachmom and Bloglovin’.